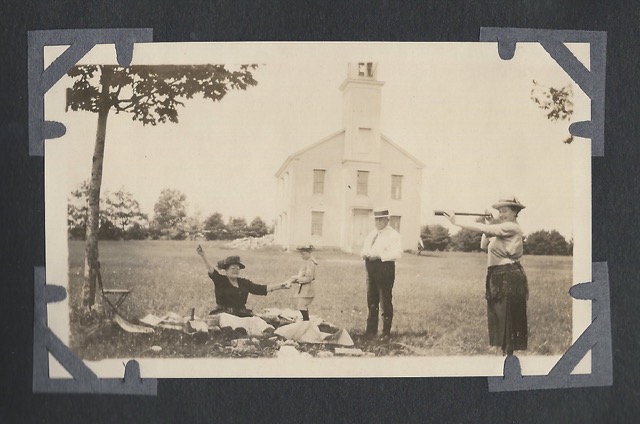 Inquire about this item

Early-20th Century Photo Album of Epic Picnickers. America (likely northeastern United States), c. 1900-1910. Heavy cardstock wraps; oblong (205 x 145 mm); contains 25 b/w photographs (110 x 70 mm, with thin white border) attached to the recto and verso of black leaves, via silver photo-corners (and, as such, removable). Images of a group of men, women, and children who appear to travel from one scenic location to another, picnicking, and generally having a most excellent time. Their car is prominently featured, and a few images show a man feeding a deer — otherwise, they picnic. Picnic in front of a church, in front of a castle, in front of a large house, in front of a hotel, oceanside. Their numbers change from groups of 4 up to 9, with smiles and hijinks all around. Near Fine. (#D9224) $125.00